It’s the 24th October and myself, Hannah, Pierce and Jamie are feeling the holiday blues. We recently came back from a magical weekend spent in the spectacular Kruger National Park, taking some time away from the project to appreciate the huge abundance of awesome wildlife the park contains. It was a seriously cool couple of days, and whilst the early morning starts and late night drives left us in need of some sleep by the end, we left feeling very lucky to have seen the species we did. What a place to spend my 21st birthday weekend, too!

After a morning spent at the school, leading a water-pollution themed session, we set off on the 4 ¼ hour drive to the Park, very much full of excitement. The journey was quite enjoyable in itself, as the route took us down from the dry, hot, bare landscape of the Soutpansberg Mountains to Tzaneen, where we saw the most greenery we had done in weeks! We passed through lush rolling hills, past pine forests, rivers (!!), and countless banana plantations, taking in this entirely novel landscape eagerly. A few hours later we arrived at the Phalaborwa Gate and finally entered the Park.

Our immediate reaction upon entering the Park was in fact one of confusement. After seeing all the classic (somewhat romantisiced) photos of Kruger: lions prowling through the wide grassy fields of the savannah and elephants gathering around waterholes, we were surprised by the dense, bare, flat bushveld that met our eyes. And where were all the animals?! Luckily, we didn’t have to wait for too long before we were spotting eagles, vultures, giraffe, wildebeest and buffalo. After looking at the map we realised just how huge Kruger is (about the size of Wales), and that the grassy savannahs we were expecting were a lot further south than where we currently were.

a very blurry kori bustard – the heaviest bird in the world

We only had a few hours to make it to Letaba Rest Camp, where we were staying for 2 nights, as they have a 6pm curfew. As we approached the camp we spotted a watering hole to the right and decided to take a look as we still had 15 minutes or so to play with. Five or six hippos were lying partially submerged in the water except for their nostrils, eyes and ears, making noises very similar to a cow before diving fully underwater. We stopped to appreciate their immense size and gracefulness in the water for a few minutes before setting off, making it into Letaba just minutes before the curfew, along with several others who’d clearly misjudged the distance too.

Keen to make the most of the day ahead and catch the early morning animals, we set off 6am, the car full of drinks, snacks, binoculars and cameras. We headed towards a camp called Olifants, following the Letaba River. Along the way we spotted several new species which we hadn’t previously seen in the dry environment of Alldays: African fish eagle, giant kingfisher, Nile crocodile, and African Jacana. Once we arrived at Olifants, we decided to buy a cold drink at the restaurant, which has a remarkable view of the river below. We noticed yet more hippos in the water, and, after a few minutes, a herd of elephants in the distance. We decided we should drive in that direction after finishing our drinks and set off quickly. However, soon after leaving Olifants, we were driving along when Hannah noticed some fresh elephant dung on the road. Another car had paused in front of us, and we were about to overtake it, when we realised that not one, but two large elephants were standing right next to the car! I’d never seen a wild elephant before and was speechless. They really were gigantic but seemed so gentle and intelligent. 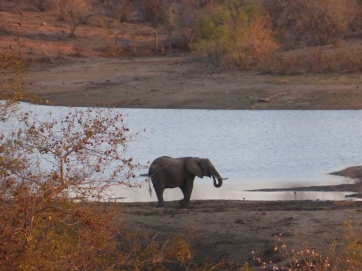 a lone elephant takes a drink at a watering hole

We started to head back to camp, determined not to be part of the Letaba Late Crew again, and along the way noticed a few cars had stopped ahead of us. As we approached, we realised they were pausing to watch a group of lions lying lethargically alongside the road. They’d obviously just eaten a large meal and now lay in various comical positions, yawning sleepily, not caring in slightest that at least 15 people were photographing them. We decided to leave when one of the females, tired of resting, had begun circling the back of our bakkie playfully, looking as though she was considering jumping onto it! 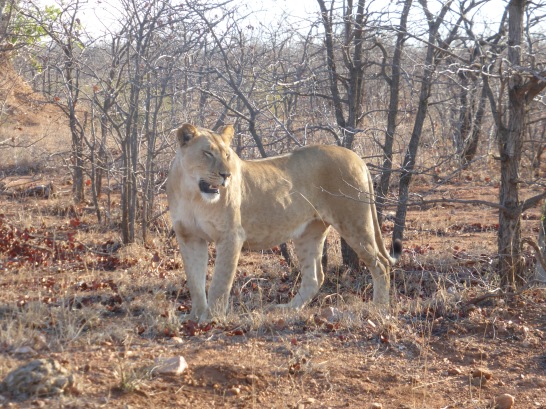 please don’t jump on our car!

About 7km from camp we realised that our goal of arriving back in camp on time wasn’t destined to come true. A group of at least 6 cars were blocking the way, with people leaning out of the windows on both sides. It had to be something good! One guy, who we had been berating for blocking our view of the right side of the road, drove up to us and wound his window down. ‘There are lions with a giraffe kill, that’s why everyone’s stopped!’ he said excitedly before speeding off in the opposite direction. The lions weren’t the only ones at the kill: as the guy drove off, a group of hyenas were revealed by the side off the road, as well as around 10 vultures in a nearby tree. The scavengers were standing or lying looking in the direction of the kill tiredly, waiting for the moment when the lions had finished with it. On the other side of the road, the lions sat protectively close to the giraffe, no longer eating it but not quite ready to release ownership. This stand-off between predator and scavenger was one of the most captivating things I’d ever seen, and we were all pretty gutted that we couldn’t stay to see the moment that the hyenas took over. We decided instead to pay for a guided night drive later that night, and I’m glad we did. Our guide took us to the site of the kill where the hyenas were now happily tucking into the leftovers, and we were so close that we could hear the crunch of giraffe bone. 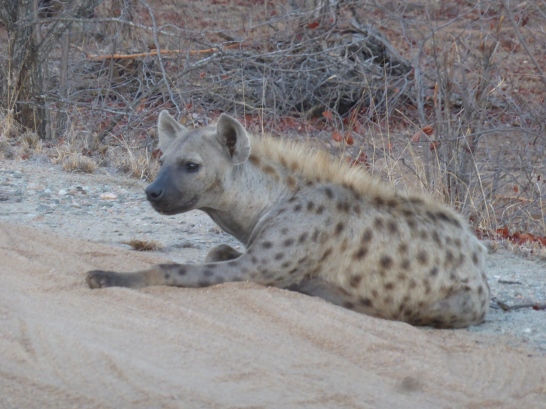 spotted hyena waits for the lions to leave 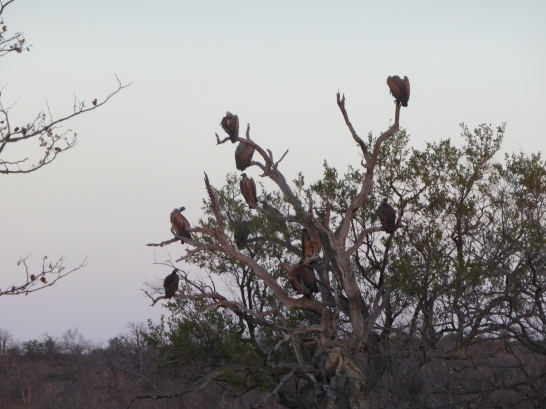 vultures watch over the kill

Our final day in Kruger came around very quickly, and we all felt that there were lots of species we still wanted to see before we left. Top of the list, particularly for Jamie, was a leopard, along with African wild dog, cheetah and rhino, so we consulted the sightings board before driving out of Letaba. Several leopard sightings had been reported around Satara, which was the direction we were heading in already, so we felt optimistic. The next few hours revealed our overtiredness and desperation to see a few more cool species before we left: every rock was an African wild dog, at least 5 trees were ‘definitely’ rhino, and we were entirely convinced that any antelope moving at more than a trot was being chased by a nearby leopard. Unfortunately, they were all just illusions, and it was time for us to leave. The weather, very aptly, turned drizzly and miserable, and by the time we exited the Park via the Orpen Gate, we felt like we might as we have been back in the UK. Despite the disappointment of the final few hours, we still felt extremely lucky to have seen what we did, and our moods picked up when we arrived at our home for the night. Shik Shack Backpackers is an eco-friendly, community-run, off the grid project, built by locals for locals. I wrote about it in the latest of the research centre’s blog posts.

shop selling crafts made by locals 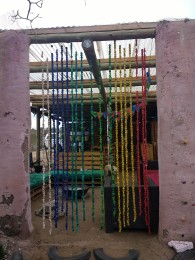 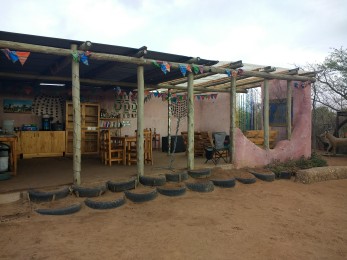 building made from plastic bottles and cow dung

We ended our wonderful weekend with a drive up to Blyde River Canyon, stopping off at the Three Rondavels and God’s Window viewpoints. The journey was slightly scary, as the project vehicle struggled somewhat to make it up the curving mountain roads, but the views from the top were more than worth it! It definitely helped reaffirm my wish to visit the Drakensburg mountains at some point during my stay and felt like a fitting way to end our trip. 5 hours later and very much ready for sleep, we were relieved to feel the familiar bump as we began to hit the numerous huge potholes covering the width of the road. We were back in Alldays! 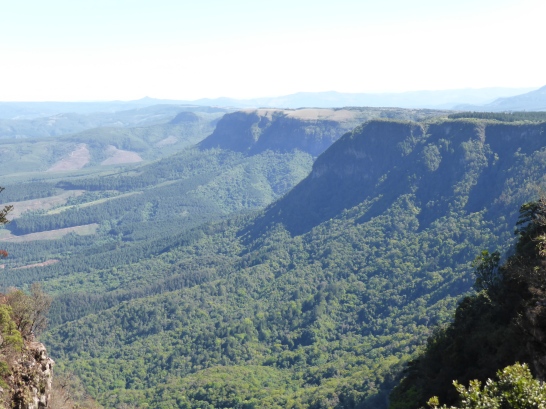 View all posts by lottiecross